These are my org-mode notes in sort of Zettelkasten style

This is what I want to do:

Here’s how I am doing it:

But first, an explanation of my hardware setup:

I use Linux. This is the software I use. Some of the software mentioned here isn’t directly used for this particular project, but I mention here since it’s good to know about it in general for Linux audio production.

Free, open source DJ software. Stands up to paid versions and works on Linux. It really is great.

You can start Mixxx with the --developer flag. In addition to extra logging and a developer menu in the GUI, it also adds the Midi Through Port-0 as an option under Controllers. This is key for sending out MIDI time code from Mixxx without having to depending on a sound card.

The MIDI for light can to send MIDI timecode from Mixxx to wherever you want (like a DAW, FX box, drum machine, lighting rig, etc.)

Full-on DAW that works on Linux. It’s not free (unless you build from source), but it’s a kind of pay what you want model as of writing this. It’s great software and it can be a slave to an external MIDI clock source.

Yes, this can be done, although I was only able to get VST3 (not VST 2) to work. I was probably doing something wrong, but I didn’t care, only interested in VST3 anyhow. Doing this requires Wine (see VST plugins section) and yabridge.

A Sound server. Lets you route audio and MIDI all over the place.

https://github.com/rncbc/qjackctl This is a GUI for managing the Jack server.

Here’s an example from Qjackctl, where I am routing MIDI from my Xone K2 to Reaper. The midi controller will now show up in Reaper in the midi device settings where it can be enabled for input and control. 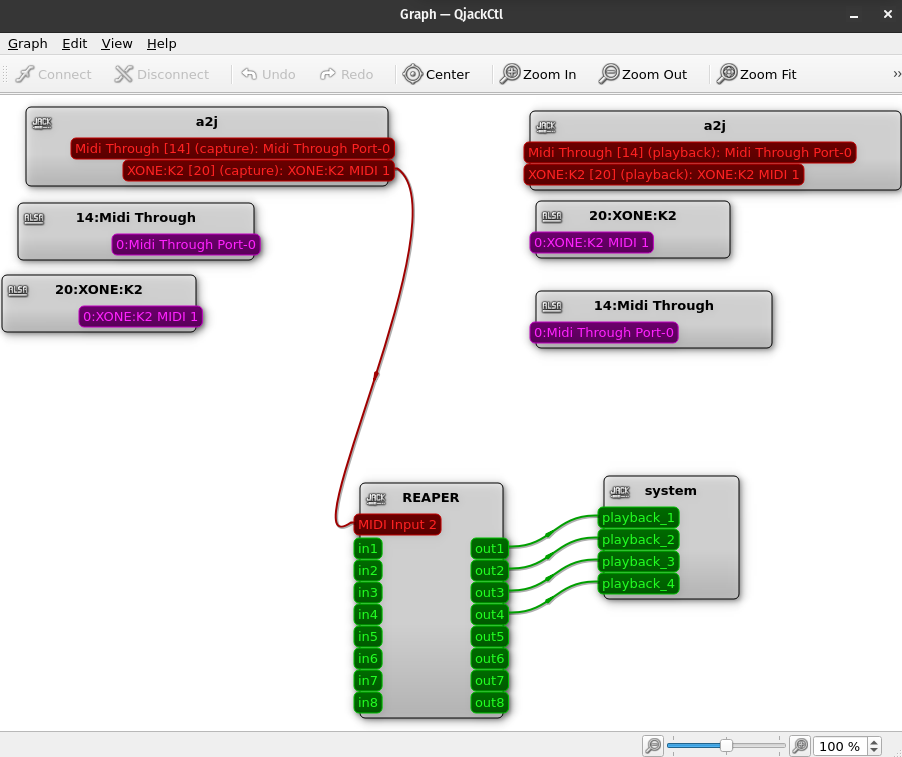 JACK is designed to support a single audio interface. There are several work-arounds for those of us with several audio interfaces. See also https://jackaudio.org/faq/multiple_devices.html

Enabling this can help performance / latency. Most Linux distros have permissions around Realtime scheduling. See https://jackaudio.org/faq/linux_rt_config.html for how to enable it (it’s really not hard).

Then you can check the box “Realtime” in the Jack settings to use it.

This is just here for reference. It can be useful to do some things via scripts, like make connections between ports in order to automate repetitive tasks. See making connection in jack on the command line.

This is Linux kernel module that can create virtual midi interfaces that appear as sound cards to the system. This isn’t needed for this project, but it’s good to know about.

n = how many ports you want

# Putting it all together